Concentration of protective marks, biggest ever found in Britain, discovered at Creswell Crags

Hundreds of protective marks, also known as Witches’ Marks, have been discovered at Creswell Crags, a limestone gorge on the Derbyshire border with history dating back 60,000 years.

These Apotropaic marks, from the Greek apotrepein, meaning ‘to turn away’, have been discovered scribed into walls and ceilings of the caves, over dark holes and large crevices. This is another huge find for the world renowned, award-winning heritage site and is significant on a national scale for being, potentially, the biggest collection of apotropaic marks in one place in the whole of the UK.

The chance discovery was made by two keen-eyed enthusiasts, Hayley Clark and Ed Waters from the Subterranea Britannica group, during a cave tour at Creswell Crags, after they noticed the rare protection marks scribed onto the cave surface. John Charlesworth, Heritage Facilitator and the tour leader at the time of the discovery, says: “These witches’ marks were in plain sight all the time! Being present at the moment their true significance was revealed will stay with me forever. After 17-years at Creswell Crags it makes me wonder what else it has to surprise us. This remarkable place continues to give up its secrets.” These marks have always been noticed, but dismissed as graffiti from before the caves were barred.

Ritualistic protection marks are most commonly found in historic churches and houses, near the entrance points, particularly doorways, windows and fireplaces to protect the inhabitants from evil spirits. It was thought that the largest quantity of witches’ marks in British caves existed in Somerset, at 57 marks, but the number at Creswell Crags far exceeds that, numbering in the high hundreds in one cave alone. Marks have since been found in all caves at Creswell Crags.

Alison Fearn, of Leicester University, who studied her PHD on Protective marks, and has seen the marks at Creswell Crags, said: “I cannot emphasise how important this corpus of apotropaia is to graffiti research, I think off the top of my head, it is the largest number of examples found anywhere and in any context in the UK.”

The number and variety of witch mark designs is unprecedented. Among the most common found are the double VV engravings which are believed to make reference to Mary, Virgin of Virgins and similarly PM is Pace Maria. Others are believed to be devices for capturing or trapping ‘evil’ and these include diagonal lines, boxes and mazes. The marks appear to have been added to over time and may indicate a need to strengthen the protection in response to a period of unexpected sickness, death or poor crops. The caves were excavated by archaeologists during the 19th century and in the process, widened. This may account for why some surfaces feature no marks and might suggest that there were originally an even greater number.

Academic and TV presenter, Professor Ronald Hutton, an authority on folklore, said: “This discovery is significant because it looks like the largest assemblage of protective marks ever found in British caves, and possibly anywhere in Britain. This is a suddenly a large new area of research for historians and archaeologists, and so adds appreciatively to the importance of the Crags as a world resource. This is a hugely important and exciting find, in one of the main current growth areas of knowledge about the past. Creswell Crags has already amazed the twenty-first century with its revelations of Palaeolithic designs. Now it does so again with a fresh one of medieval and early modern ritual protection marks on a huge scale, making a very important contribution, at a stroke, to one of the most significant current areas of new scholarly research.”

Duncan Wilson, Chief Executive of Historic England said of the discovery: “Creswell Crags is already of international importance for its Ice Age art and ancient remains. To find this huge number of protection marks from the more recent past adds a whole new layer of discovery. Even two hundred years ago, the English countryside was a very different place, death and disease were everyday companions and evil forces could readily be imagined in the dark. We can only speculate on what it was the people of Creswell feared might emerge from the underworld into these caves.”

Creswell Crags will be launching tours of the areas containing Witches Marks for the first time, from late February.

Paul Baker, Director of Creswell Crags said: “We’re all still coming to terms with the importance of the find. It’s strange to imagine that 11,000 years after our Ice Age ancestors made their art on our walls, that fear of the unknown may have prompted superstitious locals to return to the rock and make their mark.”

To find out more visit www.creswell-crags.org.uk

What are apotropaic marks?

Apotropaic comes from the Greek word for averting evil and the marks were usually carved on stone or woodwork near a building’s entrance points, particularly doorways, windows and fireplaces, to protect inhabitants and visitors from witches and evil spirits.

The most common type of apotropaic mark is the daisy wheel, or hexafoil, which at its simplest is a six petal “flower” drawn with a pair of compasses. Daisy wheels comprise a single, endless line which supposedly confused and entrapped evil spirits.

Pentangles, which are five-pointed stars, were often used as ritual symbols and the letters AM for Ave Maria, PM for Pace Maria, simply M for Mary or VV for Virgin of Virgins are also a common type of apotropaic mark. These letters, scribed into the fabric of medieval walls, engraved onto wooden beams and etched onto plasterwork were thought to beseech the supreme protective power of the Virgin Mary.

As well as being found in caves, apotropaic marks can be found in medieval houses, dating from around 1550 to 1750. A few have been recorded recently at Shakespeare’s Birthplace for example, where they are carved near the door to the cellar, once the store for precious beer and they have been spotted in medieval barns like the Bradford-on-Avon Tithe Barn, where they were etched into the ancient timber to protect crops. 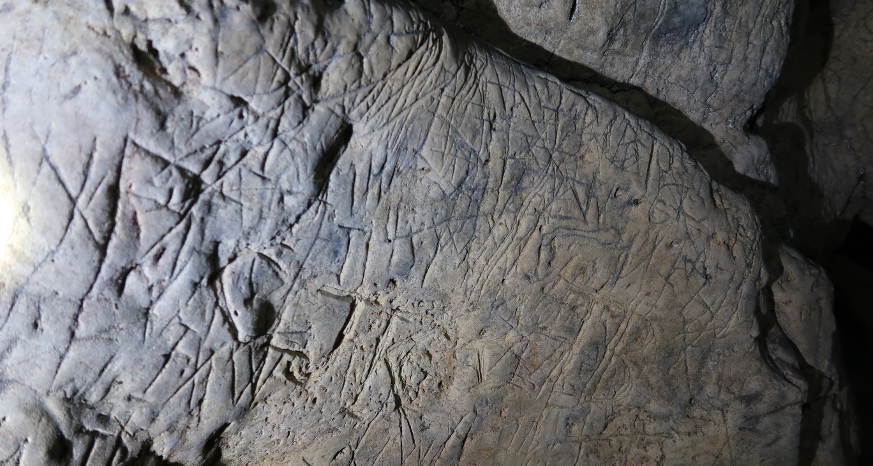 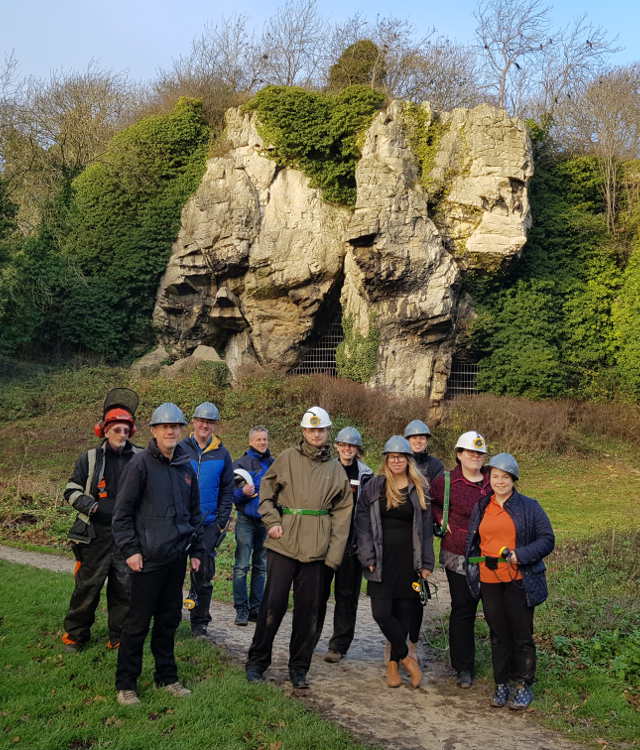