£1bn of Investment Hailed a ‘Game Changer’ for Chesterfield

Huw Bowen, Chief Executive of Chesterfield Borough Council, has described the £1 billion of developments currently happening in the town as a ‘real game changer’.

His comments came at the recent annual Celebrate Chesterfield event, organised by the town’s inward investment campaign Destination Chesterfield. Held at the Winding Wheel (25 March) the packed event saw more than 220 business leaders gather to learn about plans for the town.

Peak Resorts was announced by Prime Minister David Cameron during his visit to the US in January. Mr Bowen added: “We have a lot to look forward to with over £1 billion of investment coming into the town thanks to big projects like Chesterfield Waterside and Peak Resorts.

“Peak Resorts will be one of the UK’s flagship tourist attractions that will put Chesterfield on the map. Not only will it provide more than 1,000 jobs, but its hub and spoke model will encourage thousands of guests to disperse into the town centre economy every week and bring real value to our restaurant, retail and leisure businesses.”

Markham Vale – part of which sits within Sheffield City Region Local Enterprise Partnership’s Enterprise Zone – has also secured a further £7.6 million of funding, enabling additional areas to be opened up for development.

The funding follows £14 million of Government money last year which enabled Markham Vale to expand its business park plans by 81 acres, widen Erin Road, put in place utility infrastructure and construct 100,000 square feet of new industrial buildings. When complete the site will have capacity to bring an estimated 2,100 jobs to the town by 2022.

Further investment will also be seen within the town in 2015 as £8.6 million of funding has been secured from the Sheffield City Region Local Enterprise Partnership for Northern Gateway.

There are also plans to demolish and develop the former Royal Mail multi-storey car park on West Bars roundabout and work will also begin on the University of Derby’s Chesterfield campus later in July with the site set to open in summer 2016.

At the event Mr Bowen also highlighted the concept of town centre living as being central to Chesterfield’s Masterplan to drive footfall and create a thriving day and night time economy.

Cllr John Burrows, Leader of Chesterfield Borough Council and Vice Chair of Destination Chesterfield, said: “Chesterfield used to be a heavy industry town but we are now having our modern awakening. We punch well above our weight here in Chesterfield and the news that over the next few years the town will benefit from £1 billion of investment is very exciting. We are now a modern town thanks to a lot of hard work from our partnerships with Destination Chesterfield, and local businesses and also through our ability to access funding from the Sheffield City Region and D2N2 Local Enterprise Partnerships.

“As council leader I am very proud of the work we have done in regenerating the area. Over the coming years we want to work towards getting life back into the town after 6pm by investing in town centre residential and leisure facilities so that we can compete with the offerings of neighbouring cities.”

At the event, guests also welcomed news that the town’s marketing campaign Destination Chesterfield, which has been running since 2011, will continue until 2017.

Four areas of activity in the 2015 Destination Chesterfield plan include the launch of a new chesterfield.co.uk website, the Retail Awards, Food and Drink Awards and a month-long repeat of last year’s week-long festival of manufacturing, Made in Chesterfield, in November.

Dominic Stevens, Destination Chesterfield Manager commented: “The project is very much business-led. The plans and campaigns we develop are driven by the business community. A recent audit recognised the many strengths of the Destination Chesterfield projects, but specifically noted the success of the Chesterfield Champions network in disseminating information, lobbying and working together to trade locally. The Chesterfield Champions Scheme has gone from strength-to-strength and now has more than 160 local organisations contributing to the promotion of the town.” 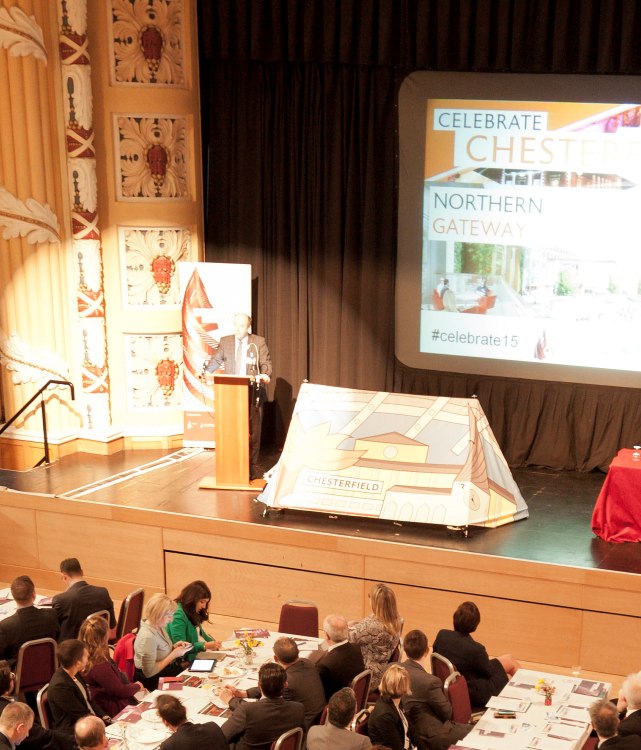