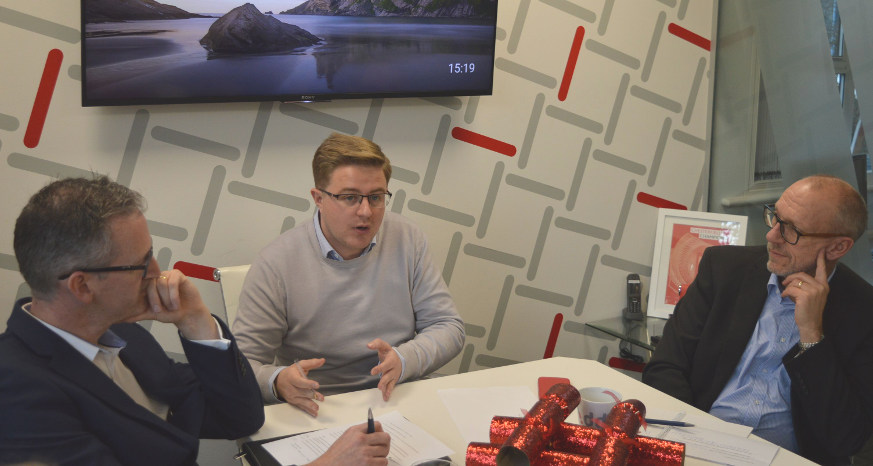 Review of the Year

With the uncertainty that Brexit and the General Election brought to 2019, the year certainly had its challenges for businesses across the UK. However, Chesterfield showed its resilience, punched above its weight and thrived for another consecutive year.

England’s cricket team united the country for another summer packed with world-class sport, but Ben Stokes wasn’t the only one hitting sixes. Businesses across Chesterfield continued to smash it out of the park with success stories surfacing throughout the year.

2019 was the year that saw the town’s major developments made significant progress, a highlight being the opening of the Premier Inn at Elder Way. The 92-bed hotel is currently running at around 90% occupancy at weekends and 60% occupancy during the week, helping the town to increase its number of overnight stays.

This was that year that saw Avant Homes acquire the land at Chesterfield Waterside and begin construction of 173 new homes – construction for the homes. It was also the year that Spanish train manufacturer Talgo made Barrow Hill its UK headquarters.

As well as putting 2019 under the spotlight, this month’s round table also looked at what is on the horizon for the town and its businesses in 2020.

Hosted by Addooco IT, this month’s round table, organised by Destination Chesterfield in conjunction with the Derbyshire Times, brought together key figures from Chesterfield’s business community to reflect on the year.

AM – Anna Melton – Director, In the Works PR

What have been the highlights for your business and for Chesterfield over the last 12 months?

AM – We’re in a privileged position because we work with a lot of businesses in Chesterfield and a lot of the development projects, such as Chesterfield Waterside and Elder Way. From our perspective 2019 has been a massively formative year for them as spades have gone in the ground and really got moving. It’s been exciting to be able to tell people about that and get some positive feedback on social media.

AMc – People don’t realise just how long the commercial development process takes. People hear about these developments and think they’re never going to happen, it’s often only when they see things coming out of the ground, that they realise that things really are happening here.

IE – One of our major highlights for me would have to be winning the New Business of the Year at the Derbyshire Times Business Awards. It ties in with all the fantastic things that are happening in Chesterfield and the growth that I’m excited about.

DP – We won the Chamber of the Year award for the UK this year and that brought so much positivity to our business. It was special and meant a lot to everybody.

RW – The mindset is changing and there is a general positivity in the town. People used to talk about things never being built but they can’t say that anymore. It can be easy to think you’ve not progressed, but you have to stop and look back to see how far you’ve come. Over the last 10 years Chesterfield has punched above its weight in terms of developments and how things have moved forward.

TG – In terms of development, the opening of the Premier Inn in the former Co-op has been a real highlight.  Because of the skills work we’ve all been involved in we were able to talent match students from Chesterfield College with new jobs created at the hotel. It was also great to see the former Co-op staff invited to the hotel opening. They were all really pleased with the building, knowing that it’s going to be used positively going forward.

RW – For me, one of the big success stories from the council has been Derbyshire Building Control Partnership (DBCP). It’s a building control model that’s relatively new to the country and has led to the creation of a successful business.

IE – In terms of highlights for the town, the continuation of the Apprentice Town initiative and being awarded the careers hub back in May are both up there for me. It’s great to see such a focus on the town’s young people, with initiatives like Apprentice Town and Made in Chesterfield. They’re really important tools to allow us to develop people with the skills that are going to be required by businesses over the next 10-40 years.

TG – I chair the local HS2 delivery board and one of the things we’ve been doing is taking a programme into primary and secondary schools to tell young people and their parents about the opportunities that having a major innovation project like HS2 brings to the area. HS2 will provide 250 jobs at the rail infrastructure depot alone, which will all be of level 4 and above.

DP – I think the Talgo investment was one of the major highlights for Chesterfield this year. Although we were beaten in our bid for the factory, Talgo still had the confidence in the town to announce they are building their headquarters here.

TG – Talgo’s investment and HS2 really puts Chesterfield back on the map as a rail town and the engineering and tech skills that come with that.

DS – ALTERX investing in the Vicar Lane Shopping Centre is one of my highlights for the year. They are thinking about retail and shopping centres differently to how anyone has thought about one in Chesterfield before. They’re finding out what people in the area actually want and are trying to put an offer in place that people want to use. What they’re doing is actually research and customer-led.

RW – A lot of people talk about the changing face of retail and the town centre but everything has always changed and Chesterfield has always adapted.

DS – I agree. We have relaunched the Chesterfield Retail Awards as the 2020 Chesterfield High Street Awards to reflect the diversity of businesses on the high street which all contribute to its success. It’s not just shops and stores but also businesses like estate agents, accountants and solicitors that also make a significant contribution to the all-important footfall on our high street.

What are you looking forward to in 2020 for your business and the town of Chesterfield?

TG – I’m really excited about Adrenaline World which is set to be built by David Lloyd at Peak Resort. It’s got planning permission and is one of the developments that will happen.

AM – The start of the Adrenalin World development at Peak Resort is really exciting. If Chesterfield can convert just 5% of its day visitors into overnight stays, this would transform the town’s visitor economy. We’ll soon have the accommodation to enable this. We’ve already got a new Premier Inn at Elder Way and, as well as the accommodation planned for Peak Resort, in the next few years we’ll have a new hotel at Chesterfield Waterside. It opens up even more opportunities for local businesses, particularly the retail, food and drink sectors.

RW – We go into 2020 with the biggest win we’ve ever had as a business. It will be completely transformative for us and we’ll be creating another five jobs off the back of this alone.

DS – From a Destination Chesterfield point of view, September 2020 will be our 10th birthday. That’s exciting for us as a team, but also because it’s a real milestone recognising the amazing project and partnership that’s developed over the last decades between business and public sector.

AMc – A number of our clients have exciting things happening in 2020. We’ve helped secure £750,000 of bank funding and a £250,000 grant from Sheffield City Region for Superior Spas to enable the company build new premises on Sheepbridge. That’s going to create 30 new full-time jobs. Typically, accountants are looked at as the boring number people, but we’re just happy to be a part of this success story in our region.

RW – Businesses in the town are really leading the way in some sectors. City Taxis has moved all of its voice traffic over to us. They’re the second biggest single brand fleet in the country and they’re doing an awful lot around changing the mix of transport that’s available with a big focus on being eco-friendly.

AMc – Uncertainty is the worst thing in a business environment. It causes people to not make decisions because they’re scared of making the wrong one. I’m hoping that people go into 2020 with more optimism and confidence in making decisions. The bold decisions the council and businesses have made in 2019 have really paid off.

TG – It’s because of our decision to forge ahead with plans rather than lie low during recession and times of national political uncertainty, that Chesterfield is now recognised as punching above its weight. This is the key reason why I am invited to sit at the table with leaders of major cities like Leeds and Nottingham. We may be a small town, but we have positivity and vision for 2020 and beyond.

Destination Chesterfield is part funded by contributions from local businesses, Chesterfield Borough Council and the European Regional Development Fund. The project is helping to improve the economic prosperity of the town through a campaign to promote Chesterfield.

The local business community plays a central role in its success by both leading an independent Board of Directors for Destination Chesterfield, as well as businesses pledging their support to become Chesterfield Champions.

For more information about becoming a Chesterfield Champion, visit https://www.chesterfield.co.uk/destination-chesterfield/champions/sign-up/ 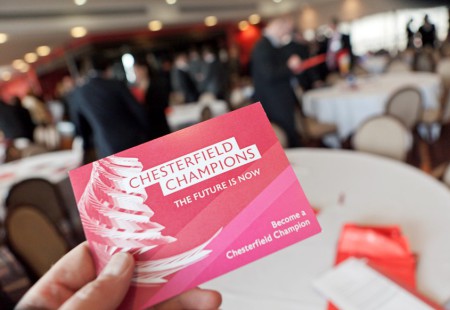 Become a Chesterfield Champion and help to drive the development of our economy, shape our future and showcase all that is good about us. 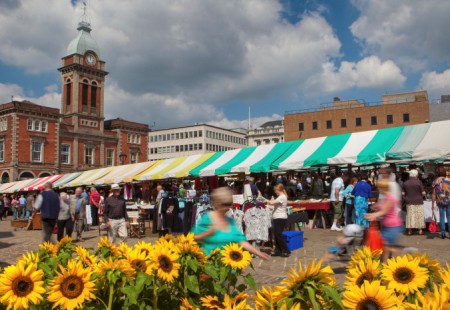 Visit Chesterfield gateway to the Peak District and Derbyshire. The historic market town with the crooked spire has award winning hotels and restaurants 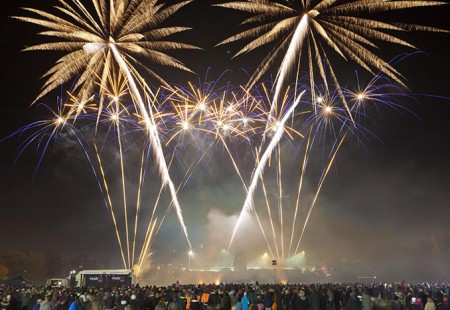 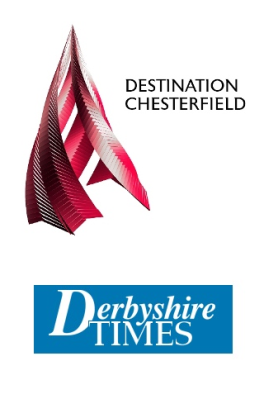 Champions Round Tables are monthly discussions organised by Destination Chesterfield in association with the Derbyshire Times.