One of Chesterfield’s most renowned visitor attractions, Chesterfield Escape Rooms is set to celebrate it’s 1st birthday in May by reflecting on a number of resounding successes since opening in 2021.

Based on Soresby Street, the games centre features several games where participants must complete a series of puzzles and challenges in order to ‘escape.’ In less than a year it has become one of the best rated escape rooms in the country.

In addition, the Escape Rooms has grown further into the Chesterfield Games Quarter, featuring VR and retro gaming offers for visitors alongside the Geeks HQ, which hosts regular trading card tournaments, board game events and much more.

Nick Hogan, founder and owner of Chesterfield Escape Rooms commented: “Wow, what a year after opening in the middle of a pandemic! We have had just on 10,000 players and unbelievably achieved the number 1 Escape Room in the UK according to Trip Advisor! Our intention was to get into the top 50 but to achieve the number 1 spot when there are 800 Escape Business in town is a real coup.”

Mr Hogan also explained how pleased he was to be providing a unique and modern visitor offer to Chesterfield’s historic town centre: “I for one am delighted to have opened in the town centre, giving something back to the town I have called home for 20 years. We believe in the region of 30% of our players have come from outside of town and most will stay for drinks and food elsewhere therefore contributing to the wider hospitality sector.  When we opened in May 2021, our building was unused and pretty derelict so its great to see something vibrant shine from something so run down.”

Speaking on the expansion into the innovative ‘games quarter’ attraction, Nick said: “The Games quarter is quite unique in that its a collaboration of 4 local businesses coming together in one space to offer lots of different gaming requirements. We have started offering cross business party packages for groups of varying sizes which has proved so popular so far.

“In the early days of opening, there was a government employment scheme called Kickstart and I focused very much on this. I initially employed 6 Kickstarters, who were people under 24 who had been unemployed for over 6 months. 12 months later 4 ex Kickstarters are now on our payroll as permanent employees. We have employed over 30 people in 21/22 so far and everyone of them has contributed to our success, I cant thank them enough.”

Nick is encouraging people in Chesterfield and beyond to keep an eye on further developments at the Games Quarter and Escape Rooms, with further plans to refresh the attractions to keep people coming back for more.

He said: “We try to refresh the games as often as possible, so having started with 3 titles we have had 5 in operation over the year. We are also considering adding least one new title this year as well as a new Xmas game from November. For those people that have played all of our physical rooms, well maybe its time they tried some of our state of the art Virtual Reality rooms as these are proving very popular and getting rave reviews!”

Chesterfield Escape Rooms supports the marketing and economic growth of the town through Chesterfield Champions, a network of over 190 organisations across Chesterfield and North Derbyshire. 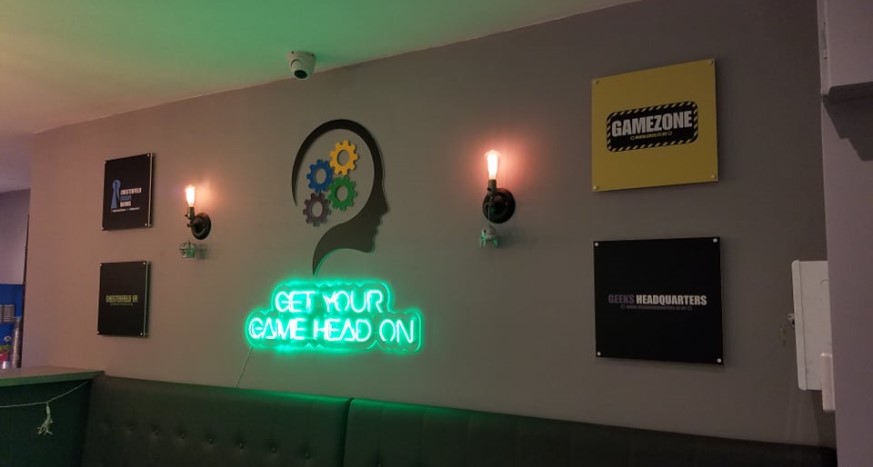 Chesterfield Escape Rooms is celebrating success as the attraction has been listed among the top 10 best escape room attractions in the UK, according to reviews website TripAdvisor.

The business has shot up the rankings since its opening in Summer 2021, following hundreds of positive reviews on the site. At the time of writing, the escape room sits at number 5 in the UK rankings. You can see the list here.

Expressing his delight at the news, owner Nick Hogan said: “Living and working in a small town that encourages visitors, customer’s feedback and word of mouth referrals are so important. Trip advisor is also a huge area of interest for visitors to assess what to do when visiting the area so this was a key focus from Day 1.

“The team have been brilliant in ensuring that customers are made aware of our objective to be a top ranked Escape Room and its only with their help and support in providing on line feedback we have managed to achieve our goal. The team have to ensure they deliver a quality product every time and they have achieved that!

Nick also added that the ranking on TripAdvisor is positive news for the town as a whole, adding to Chesterfield’s visitor economy offer: “We can tell from our booking system that approximately 35-40% of our players are from outside of Chesterfield, with a growing number travelling in from Nottingham, Sheffield, Derby and even further afield! These players are using the Escape Rooms as one of the things to do in Chesterfield but then go onto to increase spend elsewhere in the local vicinity.

“There are 790 different locations offering over 2500 Escape Rooms in the UK so we are overwhelmed with the success to date. It was a real pinch yourself moment when we got into the top 5 as our target was to be a top 50 venue.

“Our next target is to consolidate our top 5 position and then try and build on it. We have a new game going into construction in February / March ready for Easter so with further support from our customers, we maybe be able to go a little higher. The visitor economy is so important to the town so the more attractions we get the better and we are delighted to be able to help out.”

Those businesses, combined with the existing Geeks Headquarters on Soresby Street are coming together to offer varying solutions to the entertainment portfolio of the town in one place, all under the banner of Chesterfield Games quarter.

To find out more about the range of attractions in the Chesterfield Games Quarter, visit: www.chesterfieldgamesquarter.co.uk

Chesterfield Escape Rooms supports the marketing and economic growth of the town through Chesterfield Champions, a network of over 200 organisations across Chesterfield and North Derbyshire.

A brand-new leisure offering is set to open in Chesterfield, bringing a variety of new activities for residents and visitors to enjoy.

Chesterfield Games quarter is an exciting new development in Soresby Street in the Town Centre. The attraction is a collaboration of four Leisure and Gaming businesses, set to offer a variety of gaming genres all in one location.

Two new exciting businesses have chosen to move to the location due to the popularity of Chesterfield Escape Rooms since its opening earlier this year and Geeks Headquarters, which has grown in popularity for players of trading card games, board games, roleplaying games and miniature games.

Chesterfield VR – A Virtual Reality gaming centre and Chesterfield Games Zone (GMZN), a PC and gaming arcade will officially open their doors in November 2021, bringing a variety of fun activities for people of all ages.

Chesterfield Escape Rooms has also confirmed that due to an amazing response from the public, the attraction is set to expand further.

Games masters at the popular venue are in the process of creating an additional game in time for Christmas called “Santa’s Stuck up the Chimney,” with a fifth game set to launch in February 2022.

The Escape Rooms already offers three games for visitors, known as ‘The Governor,’ ‘Rob The Bank’ and ‘The Crazy Cat Lady.’

Nick Hogan, owner of Chesterfield Escape Rooms stated: “It’s a huge coup for the town to attract two new fledgling businesses to invest in the town centre and create something very unique, especially as all four owners live in the local area.

“We cant wait to get this opportunity, which shall serve the needs of all age groups, off the ground in late November.”

Chesterfield Escape Rooms supports the marketing and economic growth of the town through Chesterfield Champions, a network of over 190 organisations across Chesterfield and North Derbyshire.