Female entrepreneurs, directors, employees and apprentices in the East Midlands will once again have a platform to showcase their success stories as the Enterprising Women Awards returns for 2021.

Applications are now open for the awards, which provides recognition to outstanding women in business across the region across various stages of the career ladder.
The annual showpiece event is organised by East Midlands Chamber and led by Eileen Richards MBE and Jean Mountain, who co-founded the Enterprising Women social network in 1997.

The 2021 awards features the same eight categories as this year’s event – which was held in early March as one of the last awards ceremonies before lockdown – including an honour for Outstanding Contribution to Work in STEM, which was introduced for the first time in the 2020 event.

Eileen, who owns the Leicester-based agency Eileen Richards Recruitment and is the Chamber’s vice-president, said: “These awards are really special every single year, but 2020 has brought to light so much resilience and innovation.

“We’ve all had breaking points and as women, we’re not always good at admitting that, but we’ve kept going during some tough periods.

“So having the chance to showcase the achievements of women in our region from these times is going to be an incredible moment and I can’t wait to see the entries.
“We are incredibly grateful to our sponsors once again, many of which have returned to support what they believe to be a hugely important event for the East Midlands.”

Jean, a past president of the Chamber, added: “I am so delighted to see the Enterprising Women network, which will celebrate its 25th anniversary in 2022, go from strength to strength, and the awards are always a special event.”

This year’s event was launched during a virtual Zoom event held yesterday (15 October).

It featured a talk by Neeyantee Karia, the co-owner of Leicester-based “street food on-the-go” brand Jake & Nayns’ and the 2020 Business Woman of the Year, who reflected on the challenges she had encountered during a 20-year career in business.
The deadline for entries is Monday 21 December at 5pm.

Finalists will be announced on the week commencing 25 January and they will find out if they have won their category at a gala dinner planned for 12 March, subject to the Covid-19 situation.

Some categories are still available to businesses that want to get involved with the event. Anyone interested in sponsoring a category can contact Sanjib Sahota on 07776 596889 or email Sanjib.Sahota@emc-dnl.co.uk. 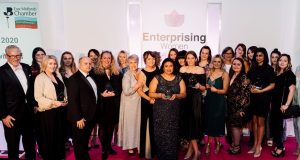