A new directory of Chesterfield’s independent businesses has been launched, featuring the best of the town’s shops, restaurants, food suppliers and more.

Un-hampered has been launched following a collaborative effort between S40 and S41 Local magazines and Chesterfield-based creative agency Defeye, after many of the town’s local businesses begin their recovery following the enormous challenges of the pandemic.

Paul Chapman, owner of S40 Local said: “Our local businesses have been hit hard over the last year, but have risen to the enormous challenge, created an online presence in record time and have changed their offering to provide delivery, takeaway or click and collect services.

“These independent businesses are the foundation of our town, when you shop with them they, in turn, feed money into the local economy. When you eat at a local independent restaurant, chances are they’ve purchased the veg from a local grocer, they may have bought it from a local farm, the farmer services his van at the local garage, the garage owner advertises with us, we eat in the same restaurant – the money stays local and helps build the local economy.

“The Un-hampered directory is the first phase, we have so much more to offer and we’ll be bringing you news as we launch each new development. We really do want to modernise access to the traditional high street and help businesses maintain a physical presence.

Matt Pritchard from Defeye explains, “when Paul first came to us to talk about what would go on to become Un-hampered, we were on board straight away. As luck would have it, we’d been discussing how we wanted to work on a self-generated project of our own that could really help push the independent businesses in town that we love. Then magically, the next week we got an email from Paul asking us if we wanted to meet up to discuss his idea. It felt like Kismet.

“Although the idea has evolved and changed through this incredibly challenging year, the ultimate goal has remained fixed. ‘Create a platform that showcases local independent businesses and gives customers an easy way of finding them’. We were lucky enough to create the Shop and Support local video campaign for the council last year and it gave us the opportunity to talk to so many incredible businesses, strengthening our resolve to get Un-hampered launched so that we could show our support to them.

“We’re excited to get phase one off the ground finally and we hope it will be a platform that helps local businesses at a really critical time.”

If you would like to view the directory or find out more about it, head to www.un-hampered.co.uk

S40 Local and Defeye Creative support the marketing and economic growth of the town through Chesterfield Champions, a network of over 180 organisations across Chesterfield and North Derbyshire. 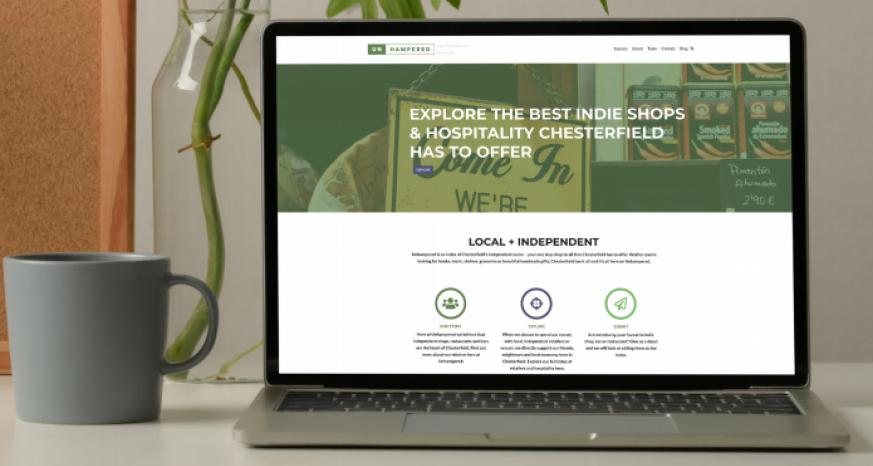