These Awards are open to Senior Leadership from SMEs, Large size organisations and Projects who have shown inspirational leadership that has made a meaningful impact on the understanding and support for mental health amongst its workforce, as well as across their industry more broadly.

The commendation recognised the efforts of Chief Operating Officer, Craig Evans, and Senior Operations Manager, Debbie Nixon in a virtual ceremony on 27th May 2021.

“Being shortlisted for the Senior Leadership Engagement Award demonstrates the tightknit relationship between Debbie and myself. Working alongside one another for almost 10 years, has strengthened our partnership and undeniable rapport. It’s an honour to be recognised with my longest serving employee ” said Chief Operating Officer, Craig Evans.

Mates in Mind is a registered UK charity raising awareness, addressing the stigma of poor mental health and promoting positive mental wellbeing across workplaces, helping to make sense of available options and support employers to address mental health within their workplace.

Each year Mates in Mind hold Impact Awards to celebrate their Supporters contributions to improving mental health within their workplaces and across the wider sector. The awards are an opportunity to highlight the impact of both large and SME organisations across the UK, as well as acknowledging individuals who have championed the development of mentally healthy workforces.

Established in 2008, UKATA is a highly respected, leading authority on asbestos training. The company’s passion is to both maintain and improve asbestos training, ensuring the highest standards are upheld by means of continually monitoring UKATA training provided by its members.

UKATA supports the marketing and economic growth of the town through Chesterfield Champions, a network of over 180 organisations across Chesterfield and North Derbyshire. 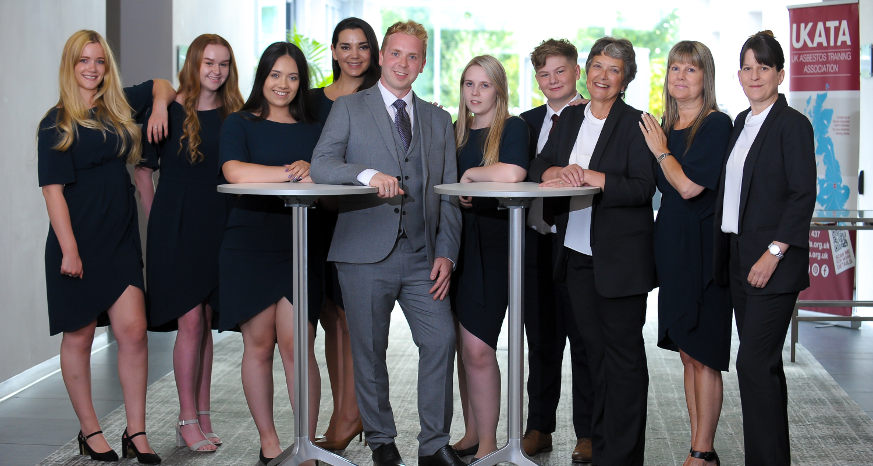 Professor Mimoza Dugolli of Pristina University and manager of Kaizen Environment is now the only provider of asbestos awareness training in Kosovo despite the fact the use of asbestos has been prohibited in in the country since 2005.

Professor Mimoza Dugolli, who is an asbestos trained architect, has worked on many projects including United Nations’ rebuild projects following the Balkan conflicts in the 1990s, and energy efficiency projects for public buildings in Kosovo, will now deliver asbestos awareness training not only in Kosovo but to other Balkan countries that also have no asbestos regulatory bodies.

Professor Dugolli, who has written a number of academic papers on asbestos safety in Kosovo, added: “Currently in Kosovo there is a huge gap in legislation framework where asbestos is concerned. Most of the industrial complexes and buildings in Kosovo constructed both before and after the war contain asbestos. Unfortunately, Kosovo has been very slow on adapting and preparing specific laws, rules and regulations relating to asbestos, so there is a severe training shortfall in the country.

Professor Dugolli completed her application to UKATA virtually during lockdown. “I received superb support whilst applying and the process was excellent. I even learnt a few new facts and can’t wait to start sharing my knowledge. There is a big job ahead of us,” she commented.

UKATA’s Chief Operating Officer, Craig Evans, added: “We are delighted to welcome Professor Dugolli to UKATA and would like to congratulate her on becoming our first international UKATA-approved training provider.

“Professor Dugolli’s commitment to raising awareness of the dangers of this deadly material in her country is highly commendable and we wish her every success and are delighted that we are able to assist in her mission.

“Asbestos is an incredibly dangerous material when handled incorrectly which is why widespread training is so important. The UK and UKATA has long strived to remain at the forefront of asbestos training and awareness since use of the mineral was banned in this

country in 1999. Hearing about a shortfall in legislation in countries like Kosovo, highlights the progress we have made both as an industry and country over the last 20 years.”

Since being established in 2008, UKATA has gone from strength to strength, now numbering more than 190-member organisations from all corners of the UK and now also in Kosovo who, together, deliver asbestos training to in excess of 200,000 people each year.

For details on becoming a UKATA member or to find a UKATA-approved training provider in your area, please visit www.ukata.org.uk, call 01246 824437 or email info@ukata.org.uk.