Associated British Ports (ABP) has unveiled the UK’s largest commercial rooftop solar array based at the Port of Hull, after contracting Chesterfield company Custom Solar to undertake its construction.

The array will produce 6.5MW of energy, more than doubling ABP Humber Ports’ renewable energy generation.
ABP’s 6.8 million investment will save 2,600 tonnes of CO2e per annum, which equates to the energy needs of 1,450 average UK homes.

Simon Bird, Director at ABP Humber, said: “This has been a huge project for ABP and our appointed contractor, Custom Solar, to undertake. I’m delighted that the Port of Hull now holds the accolade of the UK’s largest, commercial rooftop array.

“Our ambition is to keep reducing the emissions that port operations generate, by implementing a mix of clean energy production, and investing further in hybridised port equipment.

“Every bit of effort and investment to lower our carbon footprint, contributes to the region’s environmental targets. This scheme and others like it, also help to secure ABP’s energy supply, making great commercial and environmental sense.”

The project team decided on using solar technology, as it could be installed on the vast space created by the port’s many warehouse rooftops. Custom Solar began installing the solar panels in October 2019, but the project had already been many months in the planning.

Teamwork was at the heart of ABP’s solar project, with the support of many external partners such as Northern Power Grid. Custom Solar began designing the scheme to make the most of the available space, in liaison with the port’s management team. Once the design reached its final stages, a detailed assessment was made of the electrical network to plan its necessary upgrade and strengthen it – a key part of the project.

The installation of the 21,000 solar panels, powered by 49 of global solar specialists FIMER’s PVS-100-TL 100kw inverters and 3 PVS-50-TL 50kw inverters, was completed in August 2020. The team were able to quickly adapt to COVID-19 working requirements, as their established working practices were already socially distanced in their nature, and COVID secure welfare facilities were introduced.

Matthew Brailsford, Managing Director of Custom Solar, said, “It’s another proud moment for the Custom Solar team and our client, Associated British Ports, as we deliver yet another iconic rooftop solar system. Obviously this one is in a very special bracket all on its own being the UK’s largest.

“The project was in planning for nearly two years before beginning construction due to the sheer complexity of the system we delivered, this is yet another reason why the system is incredibly unique and bespoke to the client’s needs and environment.

“With carbon reduction, CSR and keen financial savings on the agenda of all large corporations during such a challenging time, we see solar as the perfect fit. The future is solar powered, and we are glad to be leading the way.”

FIMER’s chairman Filippo Carzaniga, comments: “FIMER is delighted to be supporting this new era for the UK’s solar energy market. This was a ground-breaking project, which marks our first major solar development in the country, and the largest installation of its kind.

“It demonstrates how powerful solar power can be and, we are proud to have worked closely with ABP and Custom Solar to make this vision a reality.”

17 of ABP’s 21 ports now have renewable energy projects attached. The addition of the solar scheme in Hull means that ABP’s Humber Ports can produce 29% of their energy requirements, and ABP isn’t stopping there.

Simon added: “Having now completed the solar arrays on the Ports of Immingham, Goole and Hull, ABP has already started work to understand the next phase of our ambition. Grimsby will be our focus, as the port is home to the growing offshore wind sector, we would once again like to reduce our carbon footprint using a mix of clean energy generation.”

ABP launched its core strategy in January 2020, which outlines the company’s commitment to accelerating green energy generation and storage for its port operations, as well as for new manufacturing sites in their ports. Over the last two years ABP Humber has also been investing in hybridised cranes and electric forklifts, to make the most of its onsite energy generation.

Find out more about our recent Chesterfield Round Table event, where the topic of business sustainability was discussed in detail. 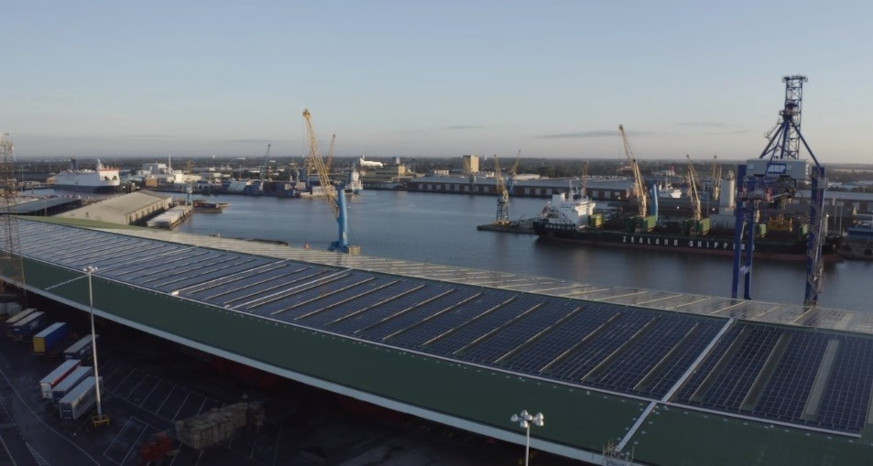