The team has started to develop the installation of a ground-breaking solar and battery system at the port, managed by Portsmouth City Council’s in-house energy services team. The project began in February 2022 and will incorporate roof-mounted solar panels across a number of buildings, a large battery, and solar canopies.

When completed, the power produced by the 2,660 solar panels will contribute around 35% of the site’s power; a significant step in Portsmouth International Port’s ambition to be the UK’s first net-zero carbon port. The installation is due to complete in summer 2022.

Portsmouth is the first UK port to have solar canopies and a mega-watt sized battery installed as part of a renewable installation. When completed, the 1.2 megawatt peak system, will be the largest solar and battery installation to date across the council’s portfolio of renewable generation.

As well as generating carbon-free power, the solar canopies will provide shade for cars waiting to board ferries; allowing them to stay cooler for longer, without having to run their engines. 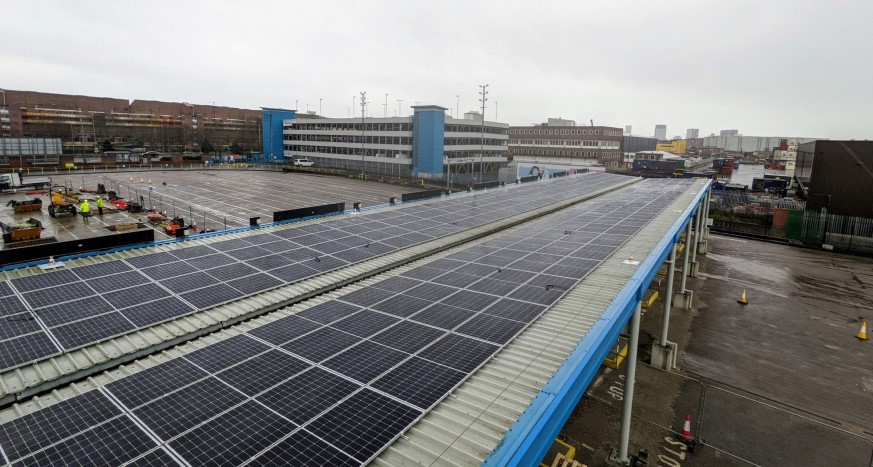 The battery, with a capacity of 1.5 megawatt hours (enough to run a typical home for 4 months), will capture green power that would otherwise be exported from the site and using it in the port’s buildings when it is needed.

The new battery will work in tandem with an upcoming battery storage pilot announced in the summer; supplying balancing services to the national grid and storing power during lower pricing periods. When complete, it is estimated that 98% of the electricity consumed by the port will come from the solar and battery, combined.

Gary Sucharewycz, CEO of Custom Solar, said: “We are thrilled to be working with Portsmouth City Council in the delivery of this special project, utilising our experience in developing and delivering solar at another established British port.

“We have already broken ground and we are excited to showcase a solar rooftop, solar carport canopy, and battery storage system. We are proud to have been selected to work towards the environmental ambitions of Portsmouth International Port and look forward to delivering another major on-site project in a busy operational environment that will aid in carbon reduction goals.”

Jerry Clarke, pilot and senior project manager at Portsmouth International Port added: “The port is owned by the people of Portsmouth, so we have a duty to control and reduce the impact of port operations on the local environment.

“We’re delighted to work with the wider council and Custom Solar on this exciting project. It will significantly expand our solar generating capability, and is part of an integrated approach that will help us to offer shore power for smaller ships, without having to take extra power from the local electricity grid.

“Combined with other sustainability initiatives, it will help us achieve our ambition of becoming one of the UK’s first zero emission ports by 2050”.

Custom Solar Ltd. supports the marketing and economic growth of the town through Chesterfield Champions, a network of over 200 organisations across Chesterfield and North Derbyshire. 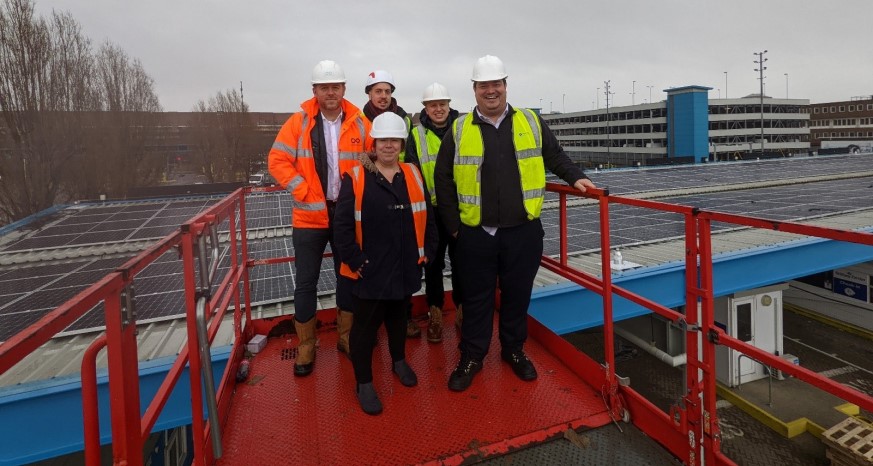 The latest development in partnership with Associated British Ports sees the Horizon Cruise Terminal fitted with 2,000 solar modules, providing an 871kWp (Kilowatt Peak) system which will generate 850MWh per year. This ultimately means that on a day-to-day basis the terminal will generate more energy than it uses.

The new Horizon Cruise Terminal is thought to be the greenest in the UK. It is a significant step forward in energy sustainability within the maritime sector, with the ‘plug-in’ Shore Power technology that will allow vessels to connect to the national grid for power, significantly cutting carbon emissions.

The innovatively designed curved rooftop of the Horizon Cruise Terminal provided challenges to the project, with significant obstacles spanning spotlights and shipping infrastructure. As well as this, the installation of the project accounted for snow loading challenges with the architectural design of the rooftop. The Custom Solar design team expertly surpassed these challenges with a bespoke developed design.

ABP’s Sustainable Development Manager, Sue Simmonite, said: “From the outset of the design phase, we have been committed to ensuring our new Horizon Cruise Terminal embraces sustainability principles. Working with Custom Solar we have been able to maximise the amount of solar generation installed on the roof space of the design such that the terminal will be a net generator of renewable energy.”

Custom Solar’s Chief Executive, Gary Sucharewycz, said: “We are proud to have delivered another fantastic project for the Associated British Ports at the Port of Southampton. We have been involved in the project from concept and worked on complex solutions through the architectural design phase.

“This resulted in our team designing a bespoke mounting solution to seamlessly integrate the solar system into the bi-directional curvature of the roof. It’s been a fantastic project to have been involved with and one that our team have enjoyed being part of. The visual impact is impressive but more importantly we have assisted our client in identifying and creating solutions for deploying on site solar in a complex environment which is what we specialise in with our expert team.

“We operate and maintain over 3MW of solar assets at the Port of Southampton that we delivered over the last 3 years with further projects being developed and delivered.

The firm’s track record of tailoring projects for large-scale commercial clients relies on creativity, expertise in engineering, and an industry-leading attitude to health & safety. The company values the trust placed in it to provide the correct solar solution and investment plan for each unique scenario.

Custom Solar supports the marketing and economic growth of the town through Chesterfield Champions, a network of over 190 organisations across Chesterfield and North Derbyshire.

Chesterfield based Custom Solar has completed a £74,000 project at a fellow North Derbyshire business, creating energy savings equivalent to supplying eight average UK homes with electricity for one year.

Xbite is an e-commerce firm based in Chesterfield in which operates retail brands including 365Games.co.uk, Roov.co.uk, Maison & White, Pukkr and Shop4. The firm was awarded a maximum value £20,000 low-carbon energy grant to help install over 270 solar panels at its HQ offices at Barlborough and warehouse at Markham Vale.

The grant was made available through the DE-Carbonise project, a collaboration between the University of Derby, Derby City Council and Derbyshire County Council which offers help to SMEs seeking to lower their carbon emissions and will contribute to the total project investment of £74,000.

Custom Solar installed 278 panels onto the Xbite HQ at Balborough, which will generate 74,760 kw/h per annum, enough to power 21 residential homes for the year. This solar installation will also reduce CO2 emissions by 21 tonnes per year which is the equivalent to the tailpipe emissions of 10 fossil fuel cars.

Gary Sucharewycz, development director at Custom Solar, said: “We are delighted to be working with Xbite. Whilst we are a national developer and provider of solar systems it is great to support local projects such as this. Investing in sustainability and renewable energy projects is majorly important to the environment, good for our communities, and great for businesses wanting to make an impact by generating their own power on site, which in turn makes significant savings on their power expenditure.”

Nick Whitehead, managing director at Xbite, said: “As part of our values to innovate and invest today for tomorrow, we are investing heavily to install solar panels at our Barlborough HQ. This installation means we can look to decrease our environmental impact, with beneficial gains towards operational performance, therefore improving our overall economic performance.

“The DE-Carbonise Team took all the hassle away from applying for the grant and were great to work with. Solar panels will help us reduce our CO2 emissions by 20,731kg per year, and generate 74,760 kWh per year of electricity, some of which we will be able to sell back to the National Grid.”

Ade Agbonyin, project officer at De-Carbonise, said: “Through our guidance, Xbite saw the chance to radically improve the company’s energy and environmental efficiency and make the shift to more sustainable business practices.”

The DE-Carbonise project launched in November 2019 and is a 3-year extension to the previously successful and award-winning D2EE project, part-funded by the European Regional Development Fund. Grants of up to £20,000 are available for businesses looking to improve their environmental practices. Over 500 businesses in Derby and Derbyshire have been supported to date. 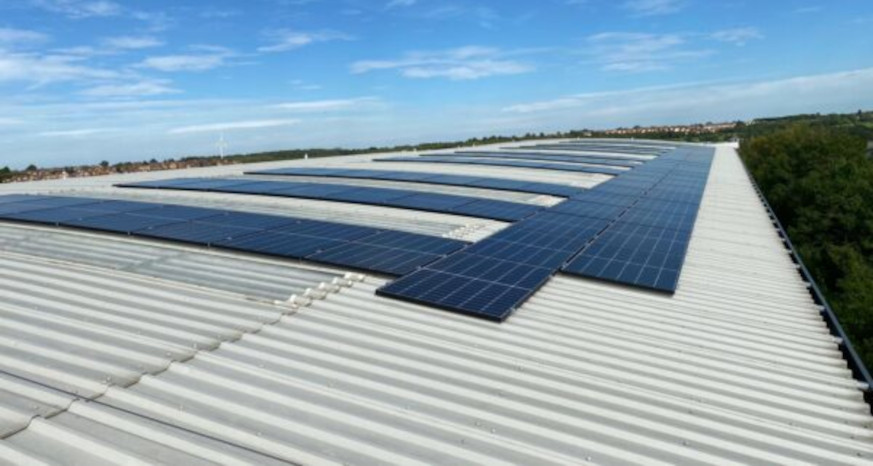