Walton Hospital has become the latest site for people in Chesterfield to receive their Covid-19 vaccination, replacing the iconic Winding Wheel Theatre.

Vaccinations started at Walton Hospital, on Whitecotes Lane, from Monday, September 13, with patients able to attend from 12:30 to 17:30 for first or second doses. Further clinics will also be held on September 15 and September 18.

Patients can either just walk in for their vaccination, or book appointments by calling 119 or visiting the National Booking System. A dedicated local booking line will also be open from 9am on September 14: 01246 253 030. Patients without access to a vehicle can use public transport from Chesterfield Town Centre direct to Walton, including the X17, 39, 51, 2 and 2a buses. Detailed bus route information is available on the Stagecoach website.

The vaccinations will take place in the hospital’s Peter McCarthy Suite, which has been extensively repurposed to provide appropriate facilities for staff and patients.

The move to Walton Hospital continues the work done at the Winding Wheel Theatre, which now returns to its normal function. The clinic at Stubley Medical Centre, the first vaccination site to open in Derbyshire outside of a hospital hub, remains open.

“It is particularly important for those eligible to get both doses, and we are especially keen to vaccinate younger people who have not yet had their vaccination. It will help protect them and their families and help get us all back to a more normal way of life.”

“A lot of people here at Walton and from many different organisations have worked really hard to get the Peter McCarthy Suite ready to begin vaccinations, so it will be great to get started.”

Anyone who has a query about vaccinations should check the NHS Covid-19 vaccination website: https://www.nhs.uk/conditions/coronavirus-covid-19/ or call 119 for advice.

Anyone who needs to cancel a booked appointment should use the booking system they used to make the original appointment. Walton Hospital staff cannot answer questions about the vaccination programme by telephone.

Details of all clinics across Derby and Derbyshire are available on the Joined Up Care Derbyshire website: https://joinedupcarederbyshire.co.uk/public-info-covid-19/covid-19-vaccine/covid-19-vaccination-walk-clinics-and-resources. 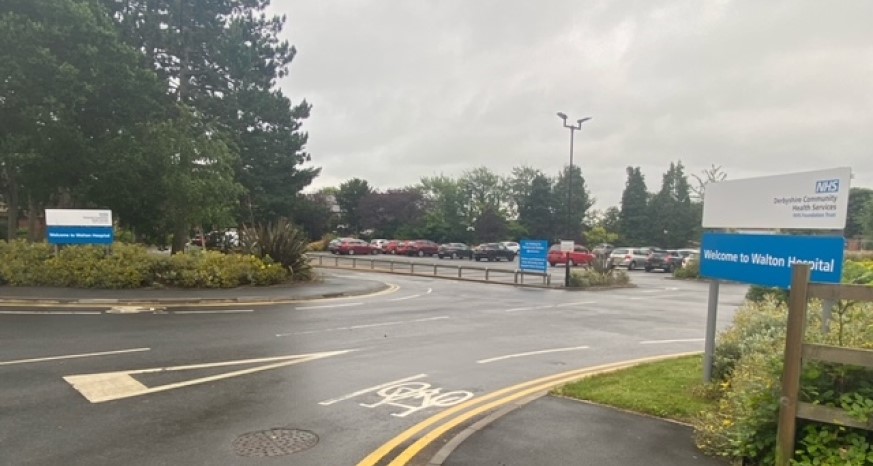 Furloughed Ashgate Hospicecare retail staff have been praised after swapping their usual roles to support their colleagues in the inpatient unit caring for end-of-life patients, during a crucial period of the pandemic.

Just last month, the charity opened a temporary second COVID dedicated wing at its inpatient unit at Old Brampton, taking bed capacity up to 21, after reporting unprecedented demand for its services and a sharp increase in COVID positive patients.

Staff from across the hospice have been redeployed to support those working on the frontline, including seven members of the retail team who were furloughed at the end of last year, after shops were forced to close in line with the Government’s lockdown restrictions.

The retail staff have taken on several roles including Ward Assistant and Ward Receptionist. Their responsibilities include ensuring PPE is available, delivering COVID test samples to Chesterfield Royal Hospital and welcoming families of patients to the ward.

Jane Jones, Head of Clinical Services at Ashgate Hospicecare, said: “We’re so grateful for the retail staff who have been helping out on our inpatient unit; they’ve made such a huge difference since they’ve been here.

“Their support with jobs like putting disposable items away and topping up PPE has meant our nurses and healthcare assistants can focus on spending their time caring for patients.

“They’re all so passionate about doing whatever they can to support the hospice so we can be there for the patients and families in our care. They have the spirit and dedication which embodies everything that being part of the Ashgate family is about.”

Among those who have put themselves forward to take on a new role is Paul Street, a furniture van driver who would usually be based at the Hasland Furniture Store. Paul is working as a Ward Assistant and says it’s been an eye-opening experience to see how the money his team helps to raise is used to directly support families.

“I was furloughed at the start of the lockdown when non-essential retail outlets had to close,” he said. “So, the opportunity to come and help on the inpatient unit at Ashgate was one I couldn’t turn down.

“I’ve certainly been out of my comfort zone; I haven’t really done anything like this before, but it hasn’t taken me long to settle in.

“I get huge satisfaction knowing the little bit we are doing is helping families of patients feel reassured that their loved ones are getting the best care possible. I think my role now is the most rewarding job I’ve ever had; I really am honoured to be part of the Ashgate family.”

Another retail worker who has been redeployed to the ward is Andrea Farmery, who would usually work as the Deputy Store Manager at the Hasland Furniture Store.

She said: “I’m very proud to work for Ashgate Hospicecare and I’m so grateful to have been given the opportunity to help my colleagues at the hospice during the pandemic. It’s lovely to be able to do a job that helps people when they need it most.

“The transition has been a learning curve to say the least, but I’ve enjoyed the challenge so far and I’m pleased to be doing my bit to support my hospice colleagues during these difficult times.”

Both Andrea and Paul volunteered to help with the vaccine rollout at the Winding Wheel in Chesterfield earlier this year too.

The redeployed retail staff helped during a crucial period of the pandemic and are set to return to their usual roles when the charity’s shops reopen on April 12th.

To fill their roles on the inpatient unit, Ashgate Hospicecare is appealing to anyone who might be interested in volunteering to register their interest.

Anyone who would like to join Ashgate Hospicecare as a Ward Volunteer can find out more by visiting www.ashgatehospicecare.org.uk/volunteer/

Ashgate Hospicecare supports the marketing and economic growth of the town through  Chesterfield Champions, a network of over 180 organisations across Chesterfield and North Derbyshire. 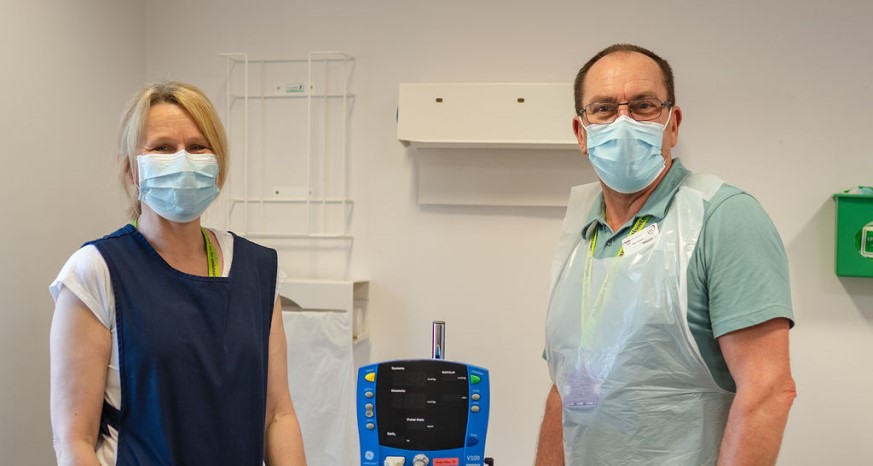 Chatsworth supplies hundreds of ready meals to the vaccination frontline

Chefs at the Chatsworth Estate have begun creating ready meals for distribution to Covid vaccination centres across Derbyshire, with hundreds of meals being delivered to frontline workers every week.

Hot food for hard working volunteers and staff includes Chatsworth favourites such as lasagne, macaroni cheese, cottage pie made with local beef, and mushroom and leek risotto among others.

Instead of preparing meals for visitors to Chatsworth, for the past few weeks chefs in the Carriage House Café kitchen have been cooking ready meals to provide vaccination staff working long hours with fuel for the fight against Covid. Chatsworth’s delivery drivers have been dropping off meals at destinations including Chesterfield Royal, St. Oswald’s in Ashbourne, Royal Derby and others among the county’s 24 vaccination centres.

Derbyshire has shown that it is leading the nation’s vaccination roll-out – in one week recently, the country vaccinated the second highest proportion of eligible residents in the whole of England.

Chris Baily Jones, Head of Catering at Chatsworth: “The vaccination drive in Derbyshire and elsewhere is absolutely vital in making us all safe for a way out of lockdown. We’re determined to do our bit to support Derbyshire NHS and all the people working such long hours to get as many people vaccinated as quickly as possible.”

Ready meals for Derbyshire vaccination centres has been made possible with funding from Chatsworth Estate alongside personal contributions from a number of individuals at Chatsworth. The Devonshire Group community forum, which includes Chatsworth, is chaired by Lord Burlington, son of the Duke of Devonshire, and was set up at the start of the Covid pandemic to reach out and support local communities.

For more information on Chatsworth and the community, visit https://www.chatsworth.org/about-chatsworth/our-shared-future/

Chatsworth supports the marketing and economic growth of the town through  Chesterfield Champions, a network of over 180 organisations across Chesterfield and North Derbyshire. 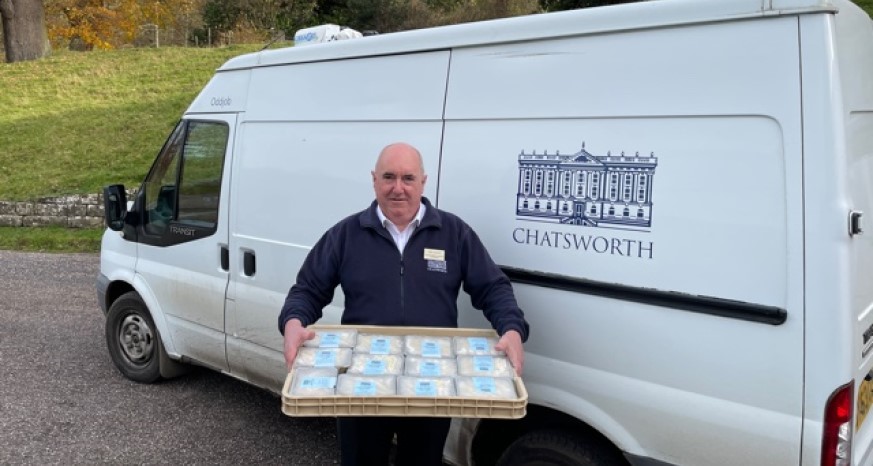 Chesterfield businesses are being urged to check if they are eligible for business grants which can help them cover costs during lockdown.

Detailed information on business grants is available on the Chesterfield Borough Council website. Some of the grant schemes, including the Additional Restrictions Support Grant have been available to apply for since early January, but there are still a number of eligible businesses that have not yet applied.

New information regarding the Taxi Driver Support Grant and Additional Restrictions Grant has been added to the website – eligible businesses and individuals are being urged to apply as soon as possible.

Councillor Jean Innes, cabinet member for business transformation and customers, said: “These grants are a vital lifeline for local businesses, and I would encourage every business owner to apply. This funding can be used to cover a variety of costs including rent on business premises and other bills.

“Our team are working hard to process these payments as quickly as possible but it’s vital that eligible businesses apply in order to access this funding.”

The process to apply for business grants through a secure online form and applicants will need to submit some evidence, including bank statements, when applying.

There are currently five different business grants available to apply for online:

– Local Restrictions Support Grant (LRSG-C) – for businesses that have been forced to close due to national lockdowns or local restrictions.

– Local Restrictions Support Grant (LRSG-O) – for businesses linked to the hospitality and leisure sectors that have remained open but were severely affected by tier 3 restrictions between 2 December and 30 December 2020.

– Additional Restrictions Grant – a discretionary scheme for businesses that are not able to claim a Local Restrictions Support Grant – Closed (LRSG-C) but have been severely impacted by national or local restrictions.

– Closed Business Lockdown Payment – a one-off top up grant to support businesses that have been forced to close during national restrictions from 5 January 2021.

– Taxi Driver Support Grant – a one-off payment to support local taxi, private hire and contract drivers who are licenced to trade in the borough of Chesterfield.

Find out more about these grants and apply online by visiting: www.chesterfield.gov.uk/bsg 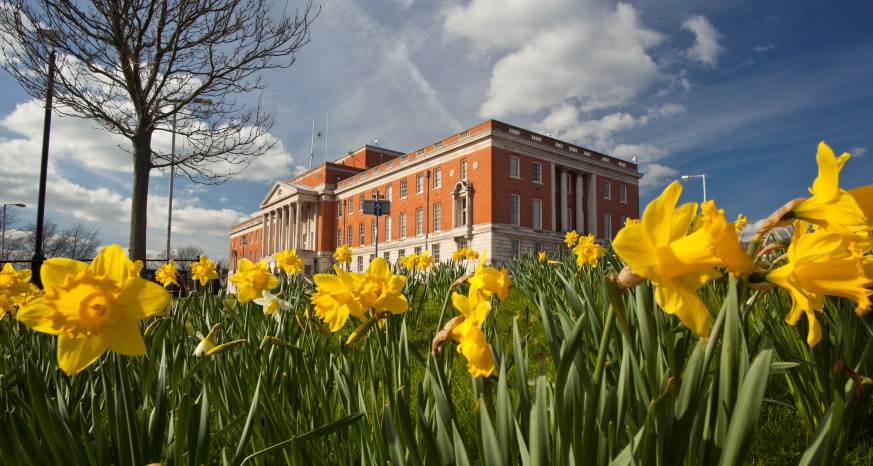